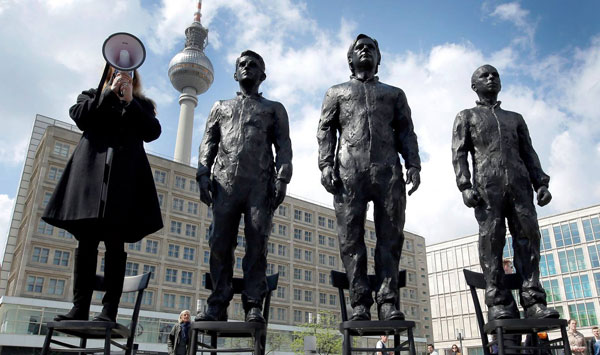 Anything to Say? Stand up with Snowden, Assange and Manning at #ijf16

The sculpture Anything to Say? will be in Perugia, in Piazza IV Novembre, during the International Journalism Festival. Davide Dormino’s public artwork Anything To Say? is a bronze sculpture portraying three life-sized figures of Edward Snowden, Julian Assange and Chelsea Manning, who had the courage to say no to the intrusion of global surveillance and to lies that lead to war. The fourth chair is empty and can be interacted with by members of the public.

The statue is on a European tour: Berlin, Ostrale-Dresden, Geneva, Paris, Strasbourg and for the first time in Italy it will be in Perugia, in Piazza IV Novembre, during the International Journalism Festival (06-10 April 2016). An associated panel discussion entitled From WikiLeaks to Snowden: protecting high-value sources in the age of mass surveillance will take place on Friday 08 April with speakers Sarah Harrison, Davide Dormino, John Goetz and Stefania Maurizi.

The work has been inspired by author, journalist and broadcaster Charles Glass and brought to life by artist Davide Dormino who believes in the power of public art. «It has the power to make people grow and change their point of view. The chair has a double meaning. It can be comfortable, but it can also be a pedestal to rise higher, to get a better view, to learn more.»

«They all chose to get up on the chairs of courage. They made their move in spite of becoming visible, thus threatened and judged. Some think they are traitors. History never had a positive opinion of contemporary revolutionaries. You need courage to act, to stand up on that empty chair because it hurts.»