Disinformation before and after the US election, how to create a democratic digital media policy, and what audiences want from journalism 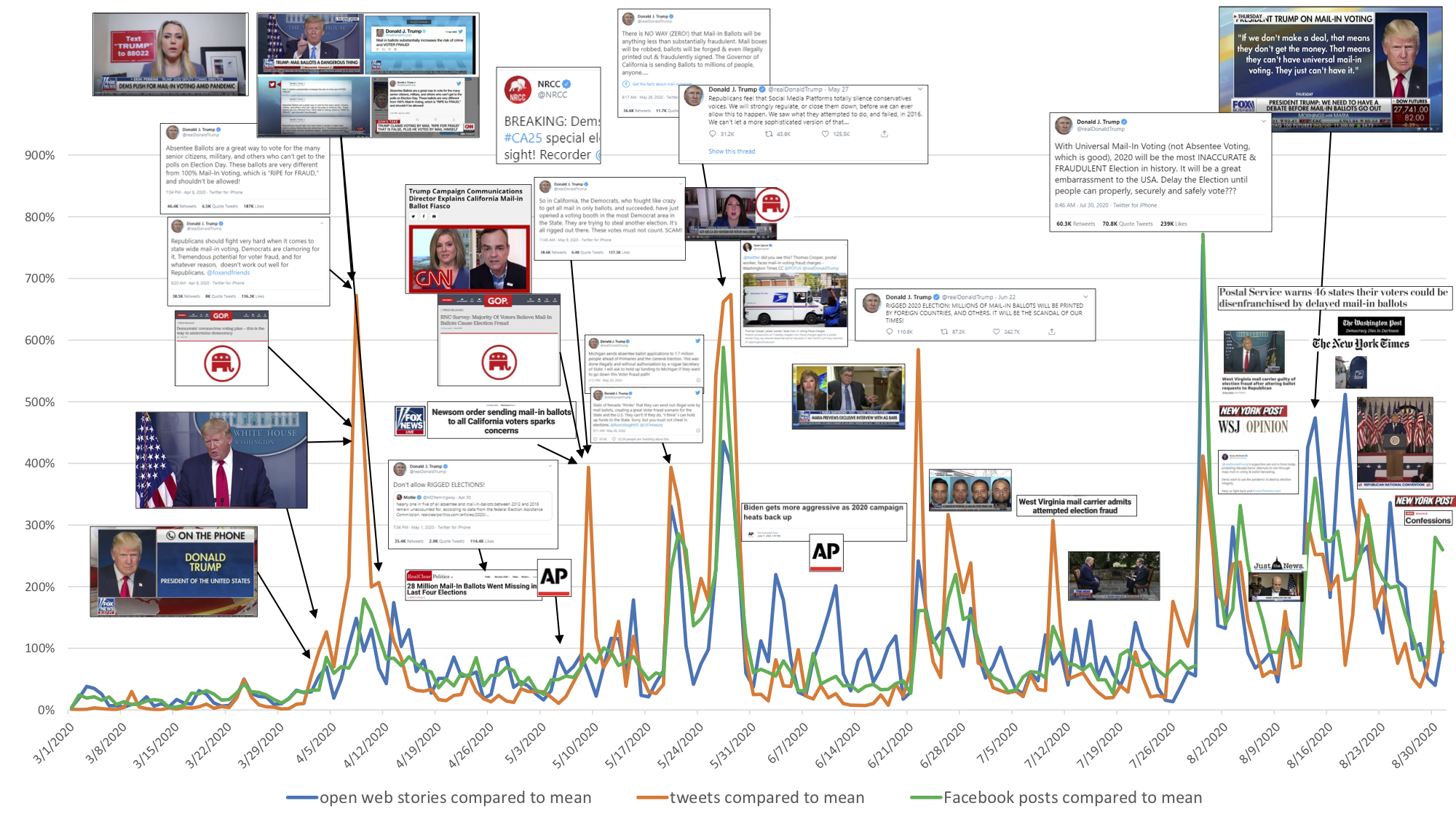 Facebook announces plan to stop political ads after 3 November. The policy change is intended to ‘reduce opportunities for confusion or abuse’ and did not give a timeline for advertising to return. The social network also removed hundreds of fake profiles tied to pro-Trump group.

How the media has abetted the Republican assault on mail-in voting. The Presidential Debate ended with President Trump reiterating the false claim that mail-in ballots were subject to mass election fraud and citing this concern in order to justify his refusal to commit to accepting the results of the election should he be defeated. That assertion capped a six-month-long disinformation campaign, waged by the president as well as his party, against the expansion of mail-in voting during the covid-19 pandemic. That campaign has succeeded: polls conducted by Pew, Monmouth, and Morning Consult in August and September show that about half of Republican voters consider fraud a major problem with voting by mail, and more than half point to Democrats as the most likely perpetrators of election interference. Democrats, by contrast, overwhelmingly believe that mail-in voting is reasonably secure and should be used to increase access to the ballot during the pandemic. The consensus of both academic and independent journalistic is that voter fraud is extremely rare and, where observed, occurs on a small scale unlikely to affect the outcome of a presidential election. To understand how voting came to be so politicized this election cycle, the Berkman Klein Center for Internet and Society at Harvard analyzed fifty-five thousand online media stories, five million tweets, and seventy-five thousand posts on public Facebook pages that referred to mail-in voting and the risk of fraud, all posted between March 1 and August 31 of this year.

Facebook bans QAnon conspiracy theory groups amid misinformation surge. Social media giant Facebook has announced that it will ban all groups “representing” QAnon, classifying the conspiracy theory movement as dangerous. The restrictions will also extend to Facebook-owned Instagram. Ros Atkins has a closer look at the story behind the decision.

Climate denial ads on Facebook seen by millions. The ads included calling climate change a hoax and were paid for by conservative US groups.

What can be done? Digital Media Policy Options for Europe (and beyond). In this report, the Reuters Institute identifies some policy options available for the European Commission and for European Union member states should they wish to create a more enabling environment for independent professional journalism going forward. Many of these options are relevant far beyond Europe and demonstrate what democratic digital media policy could look like. Media policy needs (a) to protect journalists and media from threats to their independence and to freedom of expression, (b) to provide a level playing field and support for a sustainable business of news, and (c) to be oriented towards the digital, mobile, and platform-dominated future that people are demonstrably embracing – not towards defending the broadcast and print-dominated past. The three preconditions come in order of priority.

Vietnam arrests prominent journalist as state cracks down on free speech online. Pham Doan Trang was charged with opposing the state just after the country held talks with the US on human rights.

EU calls for investigation into death of Russian journalist who set herself on fire. Slavina, whose real name was Irina Murakhtaeva, set herself on fire in the city of Nizhny Novgorod, 400 kilometers east of Moscow, according to a statement from the Russian Investigative Committee. The Investigative Committee denied any link between the search of Slavina’s apartment on the eve of her death and her act of self-immolation.

Egypt detains freelance journalist Basma Mostafa on false news. The state security prosecutor charged Mostafa with spreading false news, misusing social media, and joining a terrorist organization, and ordered her to be detained for 15 days pending trial. Al-Manassa news website says Basma Mostafa was arrested after arriving in Luxor to cover the alleged killing of a man during a police raid last week.

The impossible Rana Ayyub. “In a world where journalists are under siege, Ayyub’s relentless critique, large public following and reporting chops make hers a voice that’s impossible to ignore,” Priya Ramani writes in a powerful profile of the brave reporter.

What should journalists and newsrooms do when facing online abuse? A growing number of reporters receive harassment on social media and in their inboxes. Feeding the trolls is a dangerous game but newsrooms must act to protect and support their in-house and freelance staff.

Valuing journalism in a world of near-infinite content. Rasmus Nielsen considers the profound challenges around audience expectations, trust and revenue generation facing the news media. “Audiences want things from journalism that most journalists would like to offer —trustworthy information, explanation and analysis, and someone independent keeping an eye on the powers that be. Many people just don’t think they are getting that right now.”