Social media a threat to news organizations? Are you f*cking kidding me? It’s a treasure trove 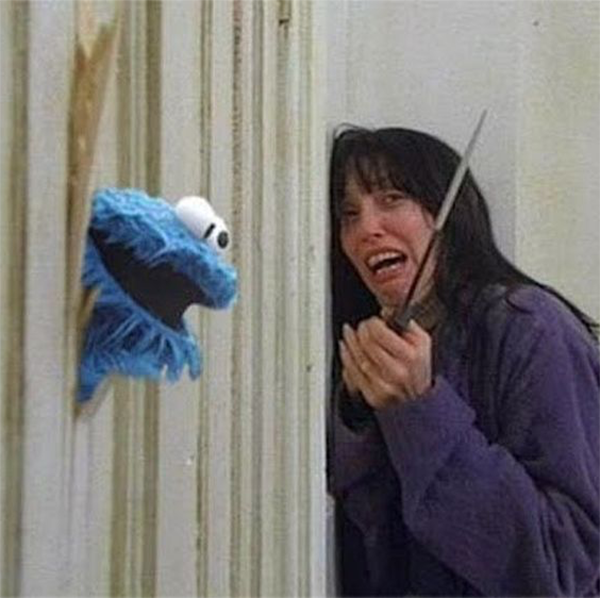 .
Lee Kuan Yew, Singapore’s prime minister considered by many as “the father of the nation,” died on March 23 of pneumonia. A few hours later, the 17 year old blogger Amos Yee published on YouTube the video “Lee Kuan Yew Is Finally Dead!,” a harsh criticism of the  government and the state of civil liberties in the country.

After being published also on The Real Singapore – one of the online news outlets not controlled by the government – the video has gone viral, collecting millions of views and has come to the attention of the authorities. Yee was accused of “a deliberate intent to wound religious feelings,” and having shared obscene images of Lee and Margaret Thatcher. The Real Singapore was closed by the Media Development Authority, a local censorship body controlled by the Ministry of Information. After being taken into police custody, Yee has been released with the obligation not to comment or share any online content while his case is still open. Yee has refused to obey to these conditions. The trial, that started in early May, has reached a verdict this week. Amos Yee was found guilty and is likely to end up in prison. The ruling is expected for 2 June.

In terms of censorship and restrictions on freedom of expression, Singapore has never been front page news. As reported by the AP, the government “has long aggressively protected its image and authority with legal action both against domestic and international critics.” Yet a case such as that of a teenager who risks imprisonment for a political opinion, no matter how irreverent he is, has to have international resonance.

Freedom of speech, in Singapore, is guaranteed by Article 14 of the Constitution, but limited by very harsh laws on press, defamation and security that allow the controlling of the circulation of news that interfere with the  national interest, domestic policy and security, and represent a strong push for self-censorship for critics and journalists. Almost all media outlets and Internet providers are somehow affiliated with the government or the ruling party, the People’s Action Party (PAP). According to the latest report on press freedom, published by Freedom House, Singapore has to be considered as a “not free” country. This week, the world of online media has been involved in the launch of Instant Articles, the new Facebook program in collaboration with the New York Times, National Geographic, Buzzfeed, The Atlantic and other international publications. It is a service that allows the creation of articles directly within Facebook, which once shared can be read from the mobile app (now available only for iOS), with practically zero loading time and a layout that combines text, video, audio, maps and the use of specific gestures for navigation.

The service, which was announced a long time ago, started with a longread of the New York Times which – in addition to content – had some banners. According to Facebook, one of the strongest elements of the project is the possibility for publishers to place their advertisements in the instant articles, allowing them to receive the full amount of the ad – or 70% if it is Facebook which sells the space.

The advertising element plays an important role in this “relationship.” The social network continues to have, year by year, ever larger portions of the online and mobile advertising pie, and bring their own advertisers to this platform which is an option that the nine media companies participating in the project clearly did not want to remain unconsidered.

As already known, Facebook currently has 1.4 billion active users per month, representing a quarter of web connections and the activity that engages the American smartphone owners for 1 minute every 5 of the use of the device. In addition, it is the place where much of online life is spent, especially regarding news (39% of Americans – according to 2014 Pew data – get their news about politics and government on Facebook). Chart from Buzzfeed showing how Google was overtaken by
Facebook as main referral traffic source, in 2013.

This is the reason why there is another great need by the major outlets to come to terms with Facebook in order to get readers where they usually meet each other and support the recent trend mentioned by Joshua Benton of NiemanLab: “Publishers will increasingly be distributing their content directly onto social networks and other platforms they don’t control.”

And that is not all. If there is one thing that Facebook can do better than many others, it is collecting valuable information about its users. These data cannot be acquired by publishers anywhere else but from poor analytics tools and can be particularly useful for profiling the reader both in editorial and advertising terms. “Facebook really understood what would be important to us,” explained Greg Coleman of BuzzFeed. “So instead of acting like someone who would dictate, they came to us and asked us what would be great for BuzzFeed.”. An idea that would include Facebook, obviously.

“The NYT Changes Its Relationship Status to Married”

.
The idea that Facebook has about itself is that it is a medium, not a publisher. This is a belief that the company has expressed more than once. The goal, however, has long been trying to establish itself as a leading partner for the media and news industry, becoming somehow necessary, the “default place” – as explained by Mathew Ingram – to go to get news, update on the marriage of the cousin, and laugh with someone. Basically, occupying the online lives of everybody and consuming the media (Will Oremus on Slate) or the entire Internet (Adrienne LaFrance of The Atlantic). 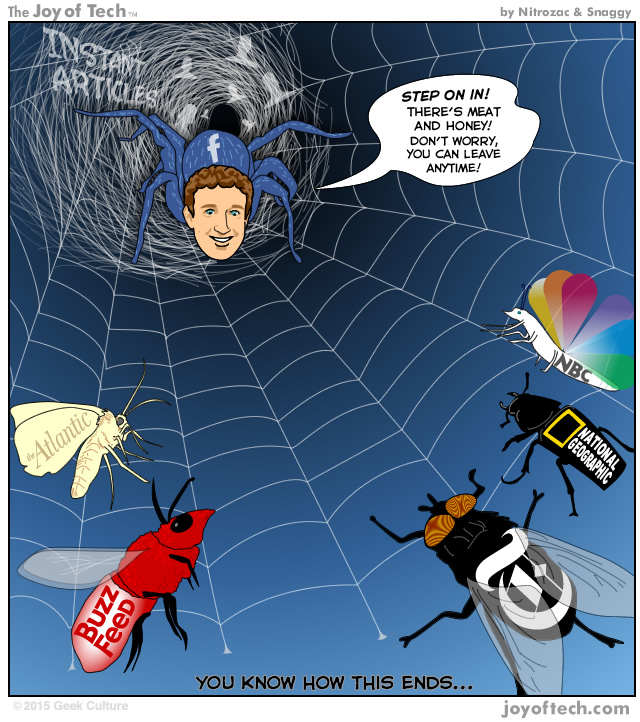 The search for this partnership has lasted for such a long time that Facebook’s projects for journalism continue to start and finish continuously. It is the case, for example, of Social Reader, a kind of homepage integrated with Facebook and created by publishers such as The Guardian and The Washington Post – a project that died a short time later. Or it is the case of the launch of Paper, which tried to combine the reading of the articles for users, and create ad hoc content for outlets. Why do this? Why seek centrality in people’s lives through journalism?

.
Because “good stories are shareable”, said James Bennet of The Atlantic in the video presentation. Through engagement, and active reading content on the platform, all the members of the agreement should gain. According to Adam Tinworth, what is important for Facebook is essentially “Facebook,” keeping more people on its app and reserving “special treatment” for publishers for just as long as they support – consciously or not – this goal.

The problem, for Tinworth, is that journalism continues to put gatekeepers between itself  and the public. From AOL to Google, there is always someone able to offer better services and experiences to the reader, and with which journalism is forced to come to terms, threatening to anchor itself forever – as  Emily Bell reminds us – to an unrelated actor, who can favor or disadvantage the work according to business and technology rules which are different from those of a newspaper.

Main problem for publishers + FB remains theoretical: can you both be journalistic + be part of a commercial power structure?

Wolfgang Blau reassured everyone talking about the “Facebook and journalism” issue through a list of frequently asked questions made recently (a post that can be entitled “Interview: You’re doing it wrong”).

Among the questions: “Publishing for Facebook means producing ever more cat content. Isn’t this degrading journalism?” (Now that you said that, I just realized, I haven’t seen a cat on Facebook in a very long time. But let me ask you: Who are your friends on Facebook?)”

I had (the privilege) to give a couple of interviews to media journalists these last days and keep wondering: why are…

.
“The media finally signs up for a Facebook account,” sums up John Herrman of The Awl, also expressing some doubt about the excessive length of the articles. The same concern is shared by Amy Webb according to whom Instant will not be disruptive, and could not really get into people’s lives – except when their data is collected.

For Dave Pell, the creator of the newsletter NextDraft, in “The NYT Changes Its Relationship Status to Married” choosing to embrace the project “sucks” (also) because the potential net neutrality, through which any blogger can become publicly relevant in a few hours,  is likely to be undermined forever. Instant, a project agreed on with a few chosen publishers, could potentially disadvantage those who are not taking part.

Gif via The Awl

The interest of publishers in agreements with Facebook is not difficult to understand, “in the end, however, this was an offer they couldn’t refuse” (Alan D. Mutter on his Reflections of a Newsosaur). “In December, for example, Facebook drove more than three times as much traffic to publisher sites than the next seven largest social platforms (Pinterest, Twitter, StumbleUpon, Reddit, Google+, LinkedIn, and YouTube),” explains Benton. It is impossible not to think of at least opening a dialogue with a protagonist like this: “We are no longer monopolies in control of content and distribution, from top to bottom,” says Jeff Jarvis on BuzzMachine.

“We now live in ecosystems where we must work with others. Get used to it. Find the opportunity in it.” At the very least, Dan Gillmor warns, in the short run:

Facebook “instant articles” will be good for a few media orgs in the short run. But journalism will be far worse off as a whole.

The launch of “Instant Articles” has undoubtedly encouraged a broad discussion, going from enthusiastic opinions to catastrophic ones. In this notebook on Spundge you will find how the debate is evolving.

View “Instant Articles: media and Facebook "in a relationship"” on Spundge