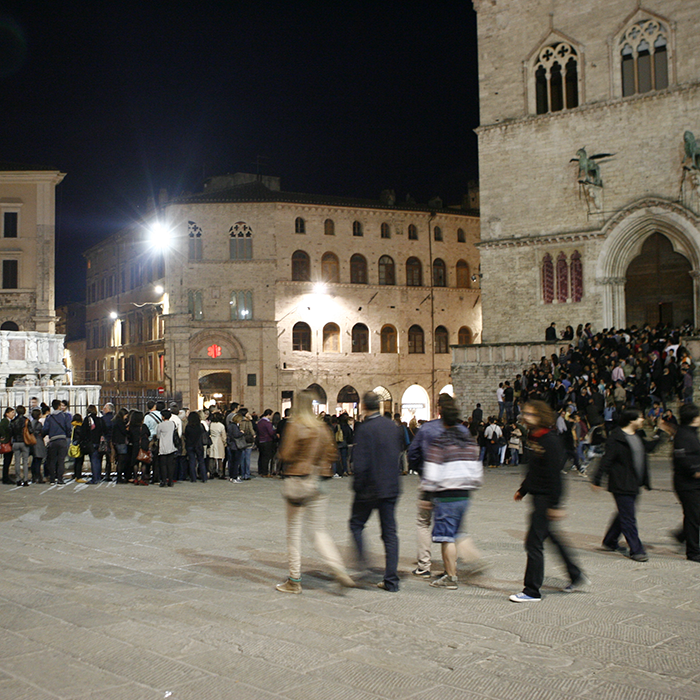 The festival is the largest media event in Europe. It is an open invitation to listen to, learn from and network with the best of world journalism. Informality and accessibility are its key features. The festival is free entry for all attendees for all sessions.

The best for free

The festival in unique because it offers the best for free. Where else can you mix and mingle gratis with Emily Bell, Carl Bernstein, Andy Carvin, Al Gore, Seymour Hersh, Mathew Ingram, Wadah Khanfar, Harper Reed, Yoani Sanchez, Paul Steiger? And thousands more. Over five full days in the stunning yet intimate surroundings of Perugia. Where else can you attend gratis the top-drawer School of Data Journalism, organised in association with the European Journalism Centre and the Open Knowledge Foundation? Where else can you choose gratis from a total of 210 different sessions covering all aspects of the media? Where else can you take part in such a big, vibrant, stimulating and in some ways improbable event, a mad mix of the well-known and the unknown, of stars and students, of journalists and non-journalists? And all with no booking, no ticket purchase, no paywall between the expert and the aspirant. Where else? Nowhere else.

From Brazil to Uzbekistan

Not festival speakers but festival volunteers; young and/or aspiring journalists from Brazil to Uzbekistan who cross the planet at their expense (the festival provides free accommodation and a daily packed lunch) in order to participate in Perugia as a volunteer. The 2013 festival welcomed 252 volunteers from 26 different countries. Why so many and from so far away? Because in addition to learning new skills and networking night and day the festival perhaps just occasionally provides something of far greater lasting value, namely inspiration. What happens before or after any festival session is arguably much more important than what happens during. The real impact comes with the opportunity to interact directly with festival speakers. To meet and greet those whose writing and/or social commitment you admire. To enjoy that memorable face-to-face moment. To be inspired. The festival is the go-to media event worldwide for those seeking such inspiration. Top journalists sit at open-air café tables chatting with festival attendees and volunteers. The message is “we’ve taken down all the barriers, the rest is up to you.”

Because we – and evidently many others – believe the festival is worth saving. And the only way to do so at present is through crowdfunding. We’ve held on for seven years thanks to sponsorships. Now’s the time for us to say to you “Here’s the festival. We ask for your support.” Those wishing to donate can do so here.

The festival was founded in 2006 by Arianna Ciccone and Christopher Potter. The first edition took place in 2007, the seventh edition in 2013 with 210 sessions in the 5–day programme, 479 speakers, 11 different venues in Perugia town centre, more than 1500 accredited journalists. Estimated total aggregate 2013 festival attendees were 50,000.

The eighth edition will take place in Perugia from Wednesday 30 April to Sunday 04 May 2014. We look forward to seeing you here.