In conversation with Wolfgang Blau: give pan-European media a chance 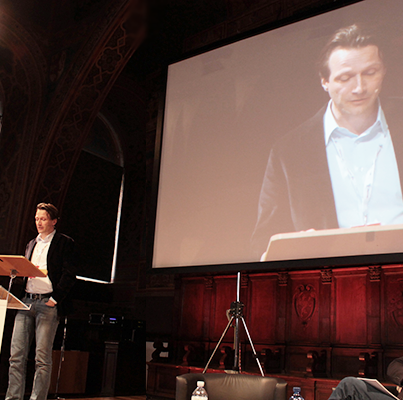 The vision of a United States of Europe has long been resonating throughout history. The European continent has a large economy, a large population, and yet it misses a large media organisation addressing Europeans as such. This is odd, or so thinks Wolfgang Blau, Director of Digital Strategy at The Guardian. He dedicated his keynote speech to the issue of a lack of pan-European publications, posing a question to himself, to European media, and to the audience: are we nuts?

When we sat down for an interview, Blau admitted: “No, we are not nuts, and I do not believe in telling anyone they “must” do something. I just think the media is shortsighted or reckless in not discussing this issue more often.” Blau reminded that out of the 25 top news sites, none of them is from Continental Europe. Because of the lack of a large, European, English-language publication, we encounter a paradox: “The perception of the European Union around the world, and of Europe, is mostly shaped by American and British news associations. These are excellent publications, but they produce a different frame from what it would be if it came from a European city,” he said.

Blau addressed the skepticism towards the market possibilities for a pan-European publication: “Isn’t the EU thing kind of over? Does anyone care?” are questions confronting anyone proposing such an idea.  “The business prospects are not simple,” said Blau. In non-English speaking countries, most of the revenues come from the domestic market, as he explained: “All the attention goes to making it to the top of national ranking, in audience size or circulation, or to maintaining this position.”

As much as national publications may feel very secured in their position of market leaders in online traffic, Blau warned of the constant expansion of global media entities: “These organisations have size and resources which give them an advantage over domestic market leaders. I wished journalism industry in Continental Europe were a bit more aware of what is coming.”

Blau acknowledged coming to Perugia with a question he doesn’t (yet) have an answer to: “It’s not the easiest topic to talk about, but I felt it was time to raise the issue.” In his speech, Blau addressed what are generally regarded as the obstacles to pan-European media, debunking most of them: there are enough topics of pan-European interests, from sport, to fashion, to politics. There are enough English-reading people. “I think we overestimate cultural differences between European countries,” he said. What we miss is diversity, with newsrooms often more homogenous than the country population itself, and with a less multilingual voice able to identify and cover common issues: “The current European narrative is too conflicted and tied to the fate of the euro. It needs renewal.” When asked about Euronews, Blau refrained from making sweeping statements: “Euronews is a pioneer, and I don’t understand the television market sufficiently to talk about it in depth. But, at least when I was working in Germany, they were never able to set agendas or issues towards which we had to position ourselves.”

In the eye of the storm

The potential success of a pan-European publication depends on following an appropriate business model: “There are different models one can experiment with. You have to be a shrewd businessperson with a passion for journalism.” The focus remains on content production to attract a large audience: “If you build a large enough audience which is engaged, meaning loyal, visiting often and sharing content, there is a business opportunity. There would be no entrepreneurs if we only started businesses we knew without a doubt would become profitable.”

Blau does not believe in one-size-fits-all: “I don’t want this to come across as a monolithic thing, talking about ‘the’ European narrative, ‘the’ business model, ‘the’ editorial strategy… Europe is too big for that, and that is its strength. I am not a businessman. I am a journalist, and as such I hope for the rise of a more pan-European public media sphere to discuss and raise issues that affect all Europeans.” Of course, nationalities will always play a role: “It is foolish to ignore national identity, but identity is made of different facets, one layer is the European identity. It’s difficult to describe what this mean in a few sentences… I can say I feel a deep sense of loyalty to Europe, a sense of admiration, of pride.”

With a sense of optimism unusual in these turbulent times, Blau finally remarked: “I try to find a balance between being impatient about Europe progressing and also realising that certain things take time. While you are in a crisis you don’t really know if that crisis is accelerating the development or if instead things are falling to pieces. But this may actually be the moment of acceleration towards a more democratic and more unified Europe.”