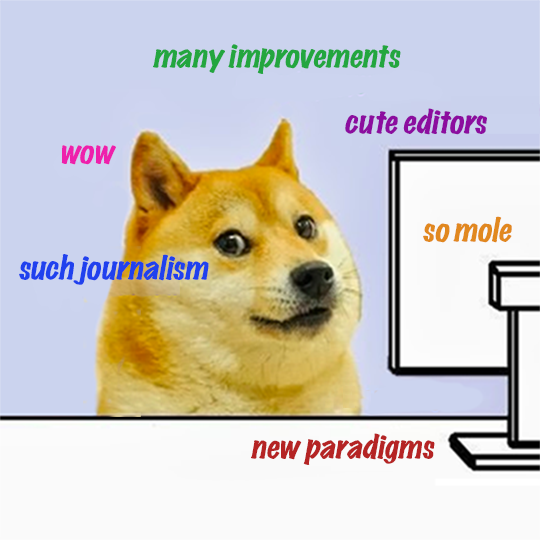 For the media, 2014 has begun the same way 2013 began and ended. In January 2013, the journalist and blogger Andrew Sullivan decided to abandon the Daily Beast to launch his own blog financed by a fundraising project that should have collected nearly 900 thousand dollars. The operation generated a wide debate on the economic sustainability of small businesses like Sullivan’s and the economic value of the independent ‘signature’, raising the issue of personal branding in online journalism.

In a post dated 31 December, Sullivan announced that his fundraising had reached 850 thousand dollars. Although the target has almost been achieved, the unquestionable success of the operations has been undermined by ups and downs, overly influenced by events (there was a spike in subscriptions during the shutdown of the U.S. government) and by the fact that next February, most of the subscribers will be asked to renew their subscription.

In a review of articles of last year, offered in an adapted and reasoned ebook, 2013 opened the doors to the issue of the personalization of journalistic work, starting from the challenge of the individual who intends to capitalize on his/her own talents and his/her own sources, and ending, in the last few weeks of the year, with the most glaring and discussed example. This is the project that will involve Glenn Greenwald, the blogger and journalist who has created Datagate, and First Look Media of Pierre Omidyar. Confirming a strengthened trend – from the datajournalist Nate Silver who left the New York Times to the AllThingsD co-executive editors who abandoned the Wall Street Journal to found Re/Code – one of the most relevant news of the beginning of 2014 is the case of the young journalist Ezra Klein and the new Washington Post of Jeff Bezos. The episode recalls another main theme of 2013 which will surely find reverberations in the current year: the acquisition of the Post by the Amazon CEO and, more generally, the interest of billionaires in the old digital journalism.

Klein, policy writer and editor of Wonkblog for the WP, proposed a new project: a website financed with an “eight figure” investment that does not seem to have met with the enthusiasm of the management and the new ownership. The 29-year-old blogger abandoned the platform to find donors. It is difficult to know the reasons for the denial nor the feasibility of the project. Regarding this race for editorial independence, there is talk about choices made at the limits of hubris.

The relationship between the reader and the community was the center of one of the most meaningful speeches of last year made by Katherine Viner, and the basis for another project started in 2014. This is Contributoria, funded by the Guardian Media Group, which intends to join the community of users, the collaboration between journalists (who offer their own stories) and crowdfunding (another issue of last year), challenging a certain reluctance of readers towards journalistic projects due to the general distrust of the profession. Between January 2013, which saw the launch of the operation of Sullivan, and December 2013, with the refining of the newco of Omidyar and Jay Rosen, the world of media was rocked by the NSA case, which obviously has influenced the public debate about news, its relationship with the sources and governments, and new business in the publishing market. Journalism has never been under such an attack by power as it has in 2013. With the more ‘generic’ global surveillance in cases, such as the wiretapping of journalists of  the Associated Press, the hearing of Alan Rusbridger before the home affairs select committee of the House of Commons and the Leveson Inquiry, journalism has had to deal with a panorama where working with anonymity and with confidence with sources appeared much more complicated. For this reason, the New Yorker has set up its own “strongbox” for sensitive information, and the Guardian – the newspaper in the forefront regarding Datagate – was forced to seek the cooperation of the New York Times and ProPublica.

In a scenario where it becomes difficult to define “journalism” and “journalist” and where anyone can produce relevant news even unknowingly (as in the case of Brown Moses), it seems difficult to imagine what the future scenarios will be for the media in 2014 (although many efforts have been made, from the special of NiemanLab to Filloux of MondayNote) unless we start from some fixed points, mainly related to the technological evolution. That same evolution which makes it difficult to precisely define the role of the information professional. According to many, such as digital strategist Nic Newman, it is easy to think that a broader adoption of tools like drones and wearable gadgets will influence the way in which news is produced and shared, as well as the wider dissemination of mobile tools can definitely change the way in which news is read and packaged (atomization of  information, greater visual impact). On one hand, the market of smartphones and tablets do not seem to be in crisis, which leads to the assumption of the primacy of digital only with respect to digital first. On the other hand, the introduction of tools such as Google Glass are destined to redefine more than one norm for journalism, technical, commercial, and even ethical. That is not all. If the attention of readers is shifting more on mobile – and it is possible to assume that the trend in 2014 will be consolidated in a decisive way – the challenge for news organizations is to intercept their willingness to purchase content and that of advertisers to buy space, taking strength from the incessant decline in advertising revenue on paper and the strong rise of the video industry.

The paywall model should prove its value away from the newsroom of the Times, while the model of native advertising – that the NYT has just launched redesigning its website – will have to do the same with newcomers (BuzzFeed, VoxMedia, Vice News) which have built their current fortunes on it.

“Journalism 2013: all you need to know” is an ebook which gathers all the articles of the weekly RoundUp of the International Journalism Festival. It condenses the last twelve months of the media, which are possibly the most decisive of the recent past.