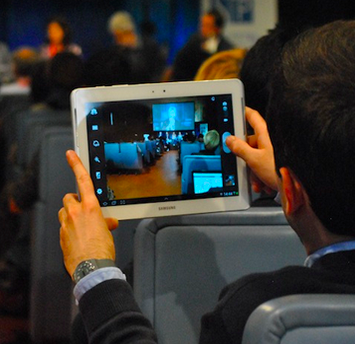 The term journalism immediately brings to mind newspapers, newsstands, typewriters and video cameras. In the last few days, one of the recurring issues in the global debate on the media was the upward trend of messenger apps. This week, Twitter launched the group messaging and many newspapers have signed an agreement with Snapchat to create together Discover (a multimedia news service within the application). Many have analyzed the reason for the recent growth of this market, which looks at tools like WhatsApp as a possible opportunity (previously discussed here). Meanwhile, the Guardian has officially launched the new website, after months of beta-testing and feedback requests to users. It seems clear, between the stereotype of the notebook and newsstands, and updates in private chats on smartphones, there is a whole world of revolutions to tell, with new challenges and new passwords.

Journalism is no longer just “newspapers,” or “journalists”. In a media context that often seems indecipherable, a platform-newspaper to make and distribute news is no longer needed, as it is not necessary anymore to be professional to recount something. What is increasingly important is to deal with the reader in an equal relationship of exchange and respect (previously discussed here). While some wonder what could be the future of a cohabitation between paper and web, over the years platforms such as Google and Facebook have grabbed advertising and contacts on the Internet, and Twitter has been the giant global news stream for every live event, imposing new ethical challenges and new methods of production and distribution to the profession.

To understand this evolution it is necessary to hear the testimony of those who are living it as protagonists. The three keynote speeches of the next edition of the International Journalism Festival will host the director of news and global media partnerships for Facebook Andy Mitchell, the executive editor of digital for the Guardian Aron Pilhofer and City University of New York professor Jeff Jarvis. Facebook has become the first carrier of traffic for online outlets, one of the most consulted news sources by readers and the most visited website in the world. The social network is working hard, from the editorial point of view, to serve media companies and to become necessary for the spread and consultation of news.

Since 2010, Andy Mitchell has been the director of news and global media for Facebook. He oversees the editorial work of the platform and manages the partnerships both with traditional companies (CNN, NBC, New York Times) and digital media (BuzzFeed, Huffington Post, Upworthy). He set up structures for broadcasters such as CNN and NBC to integrate their work with Facebook data, to ensure a more massive and innovative coverage of some major events (such as the London Olympics Games and the US general elections). He deals not only with distribution, but also with creating content.

Mitchell has a journalistic background. After 15 years of tenure at CNN.com and CNN Worldwide (as vice president of digital marketing and key member of the digital management team), he worked as vice president of business development for The Daily Beast, dealing with strategic communications (from mobile to SEO and social media).

Andy Mitchell will speak at the International Journalism Festival, and his keynote speech “From newsstand to news feed: Facebook and the shift to mobile” is scheduled on Thursday 16 April at 17.00, Sala dei Notari. Continuous innovation needs ideas, structures, choices that become experiments, strategies which turn into habits, becoming features for new publishing. During this process, the protagonists responsible for the migration to digital become crucial.

Aron Pilhofer is executive editor of digital at the Guardian. He works across the Guardian’s editorial teams to develop and implement new tools, with the aim to increase the audience, involve it more in the process, and modernize the approach of the innovation to the context in which it is consumed – basically in the digital world, more and more in the mobile one. Before working for the Guardian, he was associate managing editor of digital strategy at The New York Times until June 2014

The commitment of innovation in the sector does not end within the newsrooms. Philhofer is also co-founder of documentcloud.org, a non-profit startup which means to simplify research, analysis and the sharing of online documents, and co-founder of Hacks/Hackers, an organization designed to improve the collaboration among journalists and technologists. Today Hacks/Hackers has 2,400 worldwide members.

Aron Pilhofer will speak at the International Journalism Festival, and his keynote speech “Rebooting a 200-year-old Startup. How the Guardian is making the transition to a digitally led newsroom” is scheduled on Friday 17 April at 12.00, Sala dei Notari. In this constant search for a model for the future, Jeff Jarvis has, for a long time, been considered a staple in the global debate. He is associate professor, director of the Tow-Knight Center for Entrepreneurial Journalism at the City University of New York’s Graduate School of Journalism, and an esteemed media critic. With his Buzzmachine, Jarvis has marked for years the terrain of widespread discussion, ensuring his clear perspective on issues concerning media, publishing and the practice of the profession.

He was president of advance.net and editor of Entertainment Weekly and the New York Daily News. His point of view never forgets to unite the social, economic and cultural aspects of this historical passage. As happened with Gutenberg, where the world saw a revolutionary paradigm shift in cultural and industrial terms, the irruption of the Net is strongly influencing both human dynamics and production methods (analyzed in his works What Would Google Do? and Gutenberg the Geek), going beyond old and new economic, philosophical, professional dilemmas.

“To hell with mass media” is the keynote speech Jarvis will give in Perugia on Saturday 18 April at 12.00, Sala dei Notari, analyzing the relationship between the online community and journalism as a public service.