Newspaper crisis: little to save, everything to reinvent 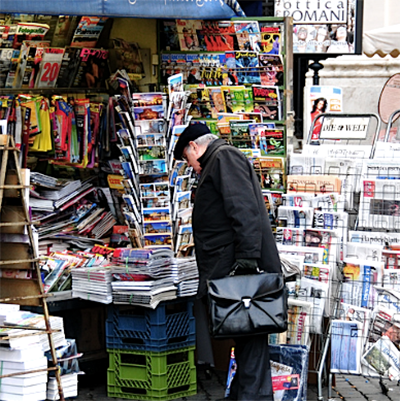 by Andrea Iannuzzi via PuntoNave – Translated by Roberta Aiello There are two types of approaches to address the crisis of publishing. The first, tactical, aims to ensure the survival of an industry struggling with revenues (of sales and especially advertising). The second, strategic, tries to imagine alternative ways forward, with no guarantee of success.

If I were a publisher, I would probably be worried about finding the right mix of tactics and strategy, being aware that it is a very difficult task, to gain, through tactics, the time necessary to develop strategic solutions without succumbing in the meantime. It is my luck (or bad luck) to be a journalist, not a publisher, and I want to talk about journalism.

As for strategy, the paradigm for every newsroom at the moment is the oft-quoted New York Times Innovation report.

Starting from the situation in the New York Times there are those who are beginning to go further, wondering what would happen if managers decided to suspend the publication of the daily paper, printing only the famous (and full-bodied) Sunday edition, focusing the rest of the resources – human, financial, planning – on digital. In particular, this post by Steve Outing seems to anticipate, by thirty years, the prophecy attributed to Philip Meyer, who stated that 2043 would be the date of the last copy of the New York Times. Moreover, ten years after the prediction of Meyer, there is no one in the world willing to bet that the newspaper industry will survive until 2043.

The complex analysis of Outing – which contemplates all the contraindications of a fundamental shift to digital, starting with the difficulty of supporting itself economically – bases its “feasibility” on the maintenance of the Sunday paper, which he said would ensure a stream of advertising revenue but would cost much less in terms of human resources.

However, there are those who go even further. In the last few days, the media theorist and scholar Clay Shirky has started a heated debate with some of his academic colleagues about “Newspaper’s Death.” This post by Vincenzo Marino for the International Journalism Festival is an excellent summary, with all the links to the original sources.

Shirky argues that it is a deception, particularly harmful for the young generation who are entering journalism, to think that print media can have a future. Shirky takes as examples some attempts to revive newspapers, greeted with enthusiasm but failing after a few months.

The debate is open, putting one’s head in the sand is not necessary, as it would be foolish to deny the evidence that “all digital” journalism has a hard time sustaining itself.

My contributions to the discussion are some ideas that I bring home from the 2014 GEN summit, the event of the Global Editors Network, which was held in Barcelona in the middle of June.

Is Asimov among us? It seems so and have patience if someone sneers reading these lines. Those of Narrative Science, a company partner of Forbes, do not laugh at all, and have already begun to collaborate with a number of newspapers to produce “automatic” stories (articles with a sense of completion) starting from statistical data. Sport events and economic reports are already produced in this way.

In the above presentation, David Sancha, of Words without writers, explains what the robot can do – and already do – in the publishing industry: writing news, editing, designing layout and selling advertising.

The answer to the inevitable objections on investigative journalism, verification of sources, the importance of the human factor in a role so delicate, is that all the routine work that is assigned to the machines means time and money saved by journalists to dedicate to their core business. Additionally, certain features such as fact-checking can be done with a human director and support technology of robots.

Jan Eric Peters, editor of Die Welt, which is owned by the German group Axel Springer, explains with these slides the digital transformation of his newspaper. In 12 years (since 2002), it has gone from a  newsroom that packaged just the paper version to one that now works full-time online and realizes the issue to news-stands “downstream” of the journalistic and productive process, with a dedicated team of 12 journalists.

Though in recent years the “beacon” for the digital transformation of newspapers was undoubtedly the Guardian, I think that the Washington Post will take up the baton. Maybe for the Bezos effect, but the strategies and projects, illustrated in Barcelona by Cory Haik, are the most innovative to have been seen so far in the so-called legacy media landscape.

The philosophy is the opposite to that of Die Welt and focuses on maximum specialization. There is not just one way of doing good journalism for all platforms. Every app, every device, every mode of use by the reader requires dedicated narrative forms. The infographics designed for a vertical scroll on the screen of a smartphone; the use of Snapchat to follow events; the Googleglass worn and used by journalists to tell of the reception at the White House; a Washington Post app designed and built exclusively for the use by smartwatch; a tool called Truth Teller for real-time fact-checking of politicians’ video speeches.

Not surprisingly, the structure led by Cory Haik is called “Innovation Desk.”

4. “The reader is mobile, like a feather in the wind”

We have gone from the “pull media” era – in which readers were attracted towards their prepackaged product – to the “push media” era, in which it is up to us to reach readers in different physical or digital places, whereever they are located. The confirmation comes from the Digital News Report of the Reuters Institute.

Readers are more and more mobile (in the sense that they use smartphones and tablets to get news), unwilling to pay for online news (although some publications show encouraging, positive trends). However, readers are rather “messy” in their news diet, as the access occurs predominantly through the search engines and social networks not  the homepage of websites.

The five trends for the future of journalism illustrated by Amy Webb:

2. “Customer-centric” design (focusing on the consumer, not the device). Size matters a lot. The stories of the future must be designed taking into account the following factors: time, activity, behavior, intellectual and emotional aptitude. Everything interacts with “the news”: what the reader is doing, where, how he gets news, at what time of day, for how long, what are  individual and social tastes. Keep in mind that content can go anywhere, anytime.

3. “Cardification”. “Cards”, in other words information by cards format, is one of the most successful in the world of  “snackable” and mobile news. From Google to Twitter, they are gearing up to give easily accessible and shareable content on a small screen.

4. Cognitive (and predictive) computing. The use of algorithms, profiling, cookies, traceability. Nowadays, it is possible to add information relevant to users’ initial request, improving and increasing their cognitive experience.

5. Experiential Journalism. There are more and more technological devices which interact with reality and we must not miss the opportunities they offer. We can imagine, for example, journalism made for three-dimensional viewers, the final frontier of so-called “wearable devices.”

Moreover, Amy Webb invites companies to become “tech-first.” It is the third phase in the digital evolution of media companies. From print-first of the pre-Internet era and digital-first of the Internet era to tech-first of the future era, in which the technology component will increasingly be the added value which really makes a difference. To understand whether we are on the right road, we should submit to the F.U.T.U.R.E. test, which stands for Foundation (solid bases, support to go forward); Unique (value of exclusivity of the project easily understood by the user); Track (tracing the development of the project through the data); Urgent (indispensability of the project in a changing market); Recalibrate (flexibility and ability to recalibrate the project depending on evolution and context); Extensible (the project must be scalable and adaptable to any type of present and future device).