Record crowdfunding for journalism supported by readers: the challenge of El Español 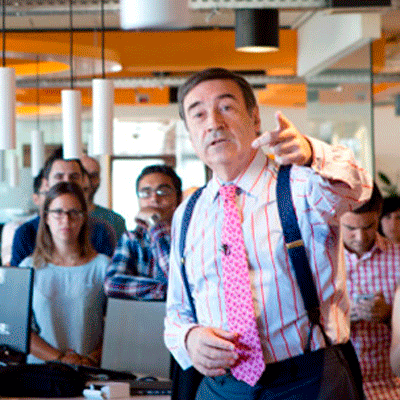 While the giants of journalism as El País, El Mundo, La Razón, or ABC are busy cutting costs, desperately seeking a solution for the loss of readers (who in the last decade have dramatically been cut in half), other publishing companies in Spain are making profits by rekindling hope in the news field. To mention some good examples that are differentiated by product, content and business model, we can cite the monthly news La Marea, the cultural magazine Jot Down, the satirical Revista Mongolia, or the generalists eldiario.es and El Confidencial.

Starting from today, we can add to the above El Español of Pedro J. Ramirez, one of the most influential print media journalists who recently definitely jumped to digital. After being fired from the newspaper he founded 26 years ago, the former editor of El Mundo has decided to invest his entire severance payment (about 5 million euros) in an online editorial project that made headlines even before the official launch on 14 October. The international press has closely followed his challenge (Financial Times, Bloomberg, The Times, The Guardian, Le Monde, Columbia Journalism Review are just some of the outlets that have interviewed him).

First build the community, then the newspaper

To understand why the announcement of a new newspaper has sparked so much interest, let’s take a look at these numbers: 3.6 million euros raised through equity crowdfunding (sale of shares) from over 5,600 shareholders, and 11,000 subscribers. Not bad for a newspaper that does not exist (yet).

In the beginning, El Español started as a foundation. The executive board contributed with more than 5 million euros which, according to Pedro J. Ramírez, would have been sufficient to ensure the practicality of the project in the eyes of investors. The fundraising campaign has developed on two levels: private investments and “equity” crowdfunding. To each donation of 100 euros corresponded one share of the newspaper, with a maximum of 10,000 euros per person.

In a recent interview, released for reasonwhy.es, the managing director has revealed that the best scenario envisaged by the founders was to reach 1,000 shareholders and 500,000 euros. This is why the crowdfunding campaign results were surprising. In a month and a half (from 10 January to 28 February), with 3.6 million euros, El Español set a world record in the field of journalism, nearly tripling the amount raised by the Dutch De Correspondent in 2013. It easily surpassed the national crowdfunding record in absolute terms.

The same Pedro J. Ramirez acknowledged having had modest expectations before the start of the campaign and that the idea of using crowdfunding was primarily motivated by the desire to involve as many people as possible in the creation of the new outlet. To ensure transparency and gain the trust of the readers-investors, the project was developed with the advice of two independent companies: KPMG and Grant Thornton. Cremades & Calvo Sotelo lawyers coordinated all the legal aspects, as well as creating this informative video for investors.

The value of the public figure of Pedro J. Ramirez was decisive for the outcome of the project, but there are at least three other equally decisive elements: the aggressive message of the call to action, the composition of a team of journalists with a very good reputation, and a convincing business plan.

The advertising campaign was run by an agency specialized in online communications that bet mainly on social networks native advertising, spending 35,000 euros for Twitter, Facebook and YouTube. The target of the ads was segmented in a focused way, selecting Ramirez and El Mundo followers, a young audiences active in news consumption. In a second phase, with retargeting, there was pressure on those who had shown interest. For the duration of the campaign, the director thanked each new shareholder in real time on Twitter.

Meanwhile, in addition to the official profiles on Facebook, Twitter, Instagram, YouTube, Tumblr and Spotify, a blog to communicate all information on the project was opened (such as the rules of professional conduct of the newsroom), giving particular emphasis to the transfer market. There will be not only journalists of national fame, but also very young professionals, the rising stars of Spanish journalism, specialized in different fields ranging from data-journalism to policy analysis.

“We are currently 96, of whom 70 are journalists,” says Eduardo Suarez, co-founder of the newspaper.

The business model of El Español is mixed. The revenue will come from advertising, from the branded content area and annual subscriptions, which grant certain privileges to the newspaper’s “members” (including the opportunity to participate in sweepstakes and cultural events, or to write articles that will be published on the readers’ blog, after being reviewed by the newsroom). This is the recipe with which the founders have promised to increase the capital from the current €18 million to about €100 million in 2020.

The challenge is certainly substantial, but those who doubt the project’s potential may be misguided. The fragmentation of media consumption and the loss of reputation of the big national players have contributed to the emergence of an increasingly demanding public which rarely gets its news by reading just one newspaper (especially if we refer to paper products). This is why crowdfunding can be decisive. It is not just a funding instrument, it also fulfills a vital role of creating loyalty among readers and building a community.

Two years ago the founders of De Correspondent promised that if they had managed to get the support of 15,000 people they could have done quality journalism. Today they continue their job thanks to their readers. Will El Español be able to repeat the magic with its 11,000 subscribers?