US election 2020, media freedom, and the journalists’ trilemma 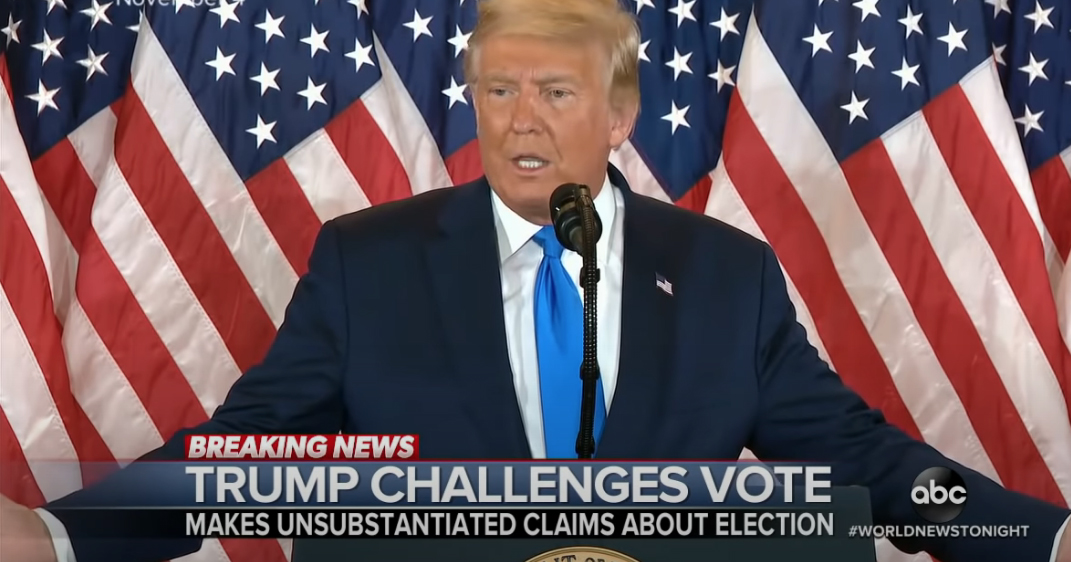 Major networks cut away from Trump’s baseless fraud claims. The three big broadcast networks — ABC, CBS and NBC — cut away from President Trump’s news conference at the White House on Thursday as the president lobbed false claims about the integrity of the election.

The disinformation is coming from inside the White House. A disinformation push to subvert the election is well underway, and it is coming straight from President Trump and his allies. The goal: to somehow stop a victory by former Vice President Joseph R. Biden Jr., or, failing that, undermine his legitimacy before he can take office. Mr. Trump’s false declaration of victory in the small hours of Wednesday morning quickly united hyperpartisan conservative activists and the standard-bearers of the right-wing media, such as Breitbart, with internet trolls and QAnon supporters behind a singular viral message: #StopTheSteal. “Trump gave voice to baseless rumours about voter fraud and once again lied about an election that is tilting away from him. He misrepresented the election laws of the country and seemingly sourced much of his material from the internet,” writes Jane Lytvynenko.

America’s press and the asymmetric war for truth. “The Republican Party—now committed to minoritarian rule, not democracy—needs fictions to sustain its power. And that means a collision with honest journalism,” writes Jay Rosen.

Protect journalists, protect the truth. Fewer journalists were killed in 2019 than in the previous 10 years, but little over 1-in-10 crimes against journalists are solved, according to a UNESCO report for the International Day to End Impunity for Crimes Against Journalists.

“Journalism is not for journalists. It’s for citizens, and we should have citizens in our minds at every point of what we do.” Award-winning journalist Shirish Kulkarni explains why audiences are fed up with news and how journalists can re-engage with them.

Mexican journalist Arturo Alba shot and killed in Ciudad Juárez. In the evening of October 29, unidentified assailants shot and killed Alba, host of the daily television news show “Telediario,” in Ciudad Juárez, in the northern Mexican state of Chihuahua. “The brutal killing of Arturo Alba Medina is yet another reminder of the danger that Mexican journalists face on a daily basis,” said Jan-Albert Hootsen, CPJ’s Mexico representative.

Hong Kong TV journalist charged over report on police misconduct. RTHK confirmed the arrest of Choy Yuk-ling, one of the producers of Hong Kong Connection. The respected current affairs programme investigated the police response to the attack, which left 45 people needing treatment in hospital.

Journalists and media freedom under attack in Lukashenko’s Belarus. Volha Siakhovich writes from Belarus about the current conditions of journalists working in the country.

First Draft and the World Health Organization come together to tackle health disinformation. The World Health Organization’s inaugural  Infodemic Management Training program kicks off next week, bringing together 270 participants selected from over 650 applicants from 83 countries. First Draft is providing technical expertise and helping to coordinate the intensive program.

The “truth sandwich” method for reporting false or dubious claims. Some lies and acts of disinformation are too important to be ignored. But repeating them in news accounts only helps them spread. What to do? Position the troublesome claim between true statements, like a sandwich.

The journalists’ trilemma, by Rasmus K. Nielsen. “Here are three values I think most journalists would like to base their work on: 1) Seek truth and report it; 2) Work with moral clarity; 3) Serve the whole public. I wonder whether journalism faces inescapable trilemma that may require tradeoffs between these different aspirations. […] Journalists’ trilemma might necessitate hard decisions about which of different values to prioritize, knowing that there are likely to be tradeoffs involved.”