What can a journalist learn from Harper Reed? 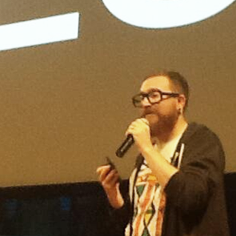 It seems he’s been surrounded by a gaggle of admirers since he’s arrived, asking to take his picture or maybe simply admiring his beard. “I did it! Photo with Harper Reed” was the most recent tweet shown, though similar ones are surely already safely archived in the United States Library of Congress.

Reed, a keynote speaker at the 2013 International Journalism Festival in Perugia, is a self-defined hacker and coder. He was the Chief Technology Officer of Threadless before serving as the CTO for Obama for America, Barack Obama’s successful 2012 US Presidential re-election campaign.

Dressed in a graphic T-shirt and large glasses sporting what is now his trademark beard, this 35.13 (if his website is truly up-to-date) year old doesn’t seem like your typical keynote speaker, but then again he doesn’t seem one who would manage 40 engineers either.

Harper shows the audience a split-picture: one side of Michael Slaby, CTO of the 2008 Obama presidential campaign, the other side of himself. Slaby is dressed in a suit, arms crossed, gaze strong. Reed is wearing a cotton jacket over what looks like another graphic tee, his hair longer than it is now and askew, his arms are crossed in an x across his chest and his hands are tagged in permanent market, “Equal Rights” on the left, “Internet Freedom” on the right.

Before you can ask it, Reed raises the question himself: Why Harper?  His wife suggested one reason: Mochi wa mochiya. Or, “For rice cakes, go to the rice cake dealer.”

In fact, Reed proved to be the rice cake dealer of tech for the Obama campaign. “US politics is very interesting where everyone starts from zero every time,” Reed said.

The team had 18 months to build their campaign. They focused on execution and on their products which included a call tool to organize calling campaigns, mobile apps, and a contribution app, among others.

The team hired over 30 engineers in three months, searching only for the best, most experienced engineers from companies like Google, Twitter and Quora. It was a simpler task than usual because they had Obama – either you enthusiastically said yes or you quickly responded ‘wrong team.’

The large team allowed them to move quickly. “We knew we would make mistakes so we wanted to make sure we could move as fast as we could,” Reed said.

Besides the best of the best engineers, the vast amount of data the team collected helped the campaign to work more efficiently, sending volunteers to call and knock only on the doors that made sense, such as that of the undecided voter.

The goal of the campaign was to not screw it up, don’t fail, and lucky for them they didn’t. “Harper isn’t a journalist, but he has a lot to say to journalists,“ said Guido Romeo, writer at Wired Italy.

Reed’s first lesson learned was to trust the power of Twitter.  “This is something we learned aggressively,” he said. “The idea is that if you don’t tweet, someone will tweet for you.”

At a conference where the importance of Twitter for journalists is raised in nearly every panel, some of which exist just to emphasize that, it’s something to take to heart. Don’t shy away from social, it is a valuable tool.

The Obama campaign used Twitter to send direct messages, reaching out to the average citizen “directly.” When that person then mentioned the message online to their followers, maybe causing the typical online chain reaction of shares, comments and discussion, the strength of the Internet for grassroots campaigns is proved.

The team had to learn how to handle the press. They wanted to keep the launch of the new tool, Dashboard, quiet. They needed a soft launch. After some research, they decided to announce it in the Wall Street Journal. The pay wall and older, conservative readership ensured that very few people paid any attention.

On the other hand, they had a host of journalists constantly seeking interviews with the tech team who were always met with a firm no. Eventually, a journalist explained the benefit of the article – that the team would seem amazing and the Republicans would cry, and the team was convinced. That is just what happened, according to Reed. (Journalists take note.)

The number one problem the team had with the media? Misinformation. “Reporters don’t understand tech,” Reed said.

The team built a platform called Narwhal, an API tool that served as an interface to all the campaigns applications, allowing various applications to interact with one another.

“For us it was our foundation,” Reed said. “The reason this was so important is because it allowed us to do a lot of important things and to focus on our products.”

However the complexity of the technology was too much for some journalists. Reed cited one article on the app that was “100 percent wrong.” “Reporters, journalists don’t be lazy,” Reed emphasized. “Do work and listen to what we’re talking about.”

How to bring together research and technology in reporting? Reed suggests math. “It’s really important that we bring math into reporting,” Reed said. “There are a lot of nerds out there that would love to help.”

Luckily for us it seems Reed is one of those, though it might have not turned out that way. When first offered the job to work on the Obama campaign he took some time before responding.

“My father was like what’s wrong with you? You have to do this it’s history,” Reed said. “I was like, oh history, that’s not a lot of pressure!”