Journalistic creativity: what is it (and how do you achieve it)? 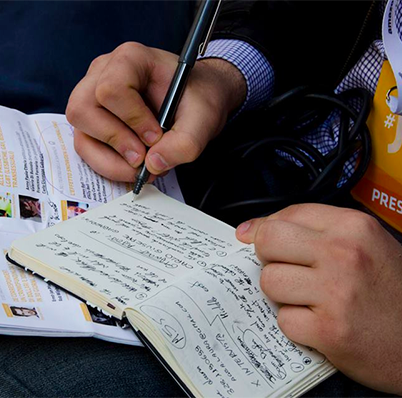 Karel van den Berg travels the world, asking one basic, but surprisingly challenging question: what is creativity? (Looking up the definition in the dictionary might show that you don’t have it, whatever it may be.)

As a profession, journalism is based on pure fact and objectivity. The very notion of the trade is solidly grounded in the idea that journalists provide answers to the questions boggling the minds of curious readers. However, if we were to trust van den Berg, we would learn that “intellectuals turn answers into questions.” But this isn’t a subtle attempt at a covert offense to journalists.

“Journalism is one of the most creative professions you can find,” he says. His background in journalism started in 1988, but soon after, he wanted to be “better at breaking news”. Being confronted on a day to day basis by the trials of finding new story ideas in an increasingly “disruptive, challenging market” sparked another curiosity in him: where does imagination fit into the journalistic process?

“Creativity is all about breaking thinking patterns,” van den Berg says. But even he admits, that might be easier said than done.

Patterns are ubiquitous and “you need them to survive, from the day you are born.” Developing yourself means building patterns. That’s because they are made up of seven aspects of everyday life:

These set notions represent the pillars of our society, and more than that, the background to our judgment and intuition. Disrupting these almost inborn instincts and values might leave us without a solid moral compass. But more importantly, it can haul us out of that dreaded writer’s block when the presses are running and the conventional frantic search for new angles didn’t yield results.

Boiling down the techniques of his book “Pattern Breaking News – Handbook for journalistic ideation,” Karel pinpointed the times and places where ideas get stuck.

“Assumption is one of the greatest sources of killing ideas in journalism,” he says, encouraging us to generally defer jumping to any conclusions. This is the process of separating creation from realization.

“The biggest problem in combining creativity with journalism is postponing your judgment, which is not natural to most journalists. Most of the times, we confuse critical thinking with good judgment. This is where the biggest challenge comes in.”

To prove his point that “our observations are so focused they overlook other options,” he played an awareness test video for the audience. We all fell for it. We clearly needed to do something about it.

Van den Berg thinks you can structure and organize creativity. Applied specifically to journalism, the creative process is made up of creative thinking and creative observation. Starting from the five famous “W questions” of news writing, the single trick to change the journalistic pattern into a creative technique is to add the word “else” at the end of each one, as in:

First thing to learn about the pains and pleasures of creative thinking is that the key is to never give up. But once you found the journalistic needle, don’t throw the haystack away – the trick is to combine good and bad ideas, instead of discarding them.

“Because creativity means breaking patterns, when you run out of answers is when you [have] reached the barriers of your preconceptions,”  van den Berg said. “And even if you find a brilliant idea, don’t be satisfied too early in the process and don’t stop. Chances are there are many more ideas to come.”

When George Poultry set out to find the total number of narratives in world literature, he allegedly found there are only 36 main plotlines, each with variations. His discovery is echoed by Ronald Tobias, who later on found that there are also only 20 Hollywood master plots.

According to van den Berg, journalism revolves around a grand total of eighteen subjects.

“We need to find journalism in the way it used to be, or redefine it. We lost our monopoly on the news; we don’t own the media anymore. We need to find out how to create value to consumers, taxpayers, audiences,” he concedes.

“We have to invent the future.”