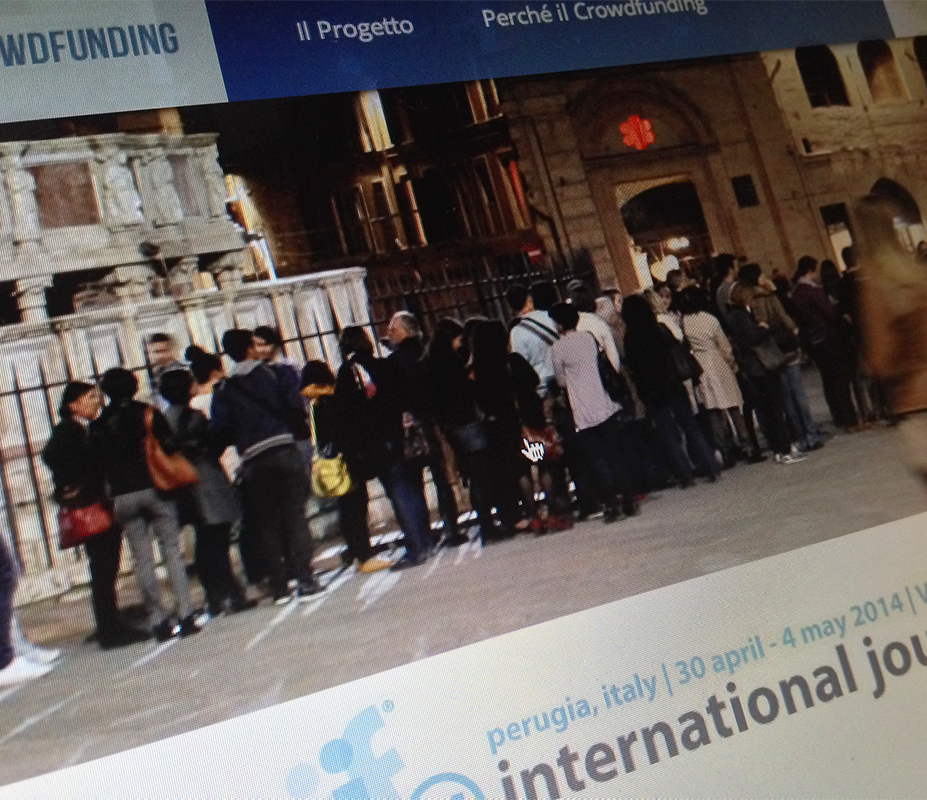 Crowdfunding: an event in an event

The movement supporting the International Journalism Festival crowdfunding campaign has created over 11,500 unique content elements involving a community of thousands of users.

There have been more than 11,500 content elements in a little over a month, with a peak on 02 November 2013 when the ijf14 crowdfunding campaign was launched at the public meeting in Perugia.

Twitter has clearly been the main vehicle for communication and participation with 11,261 tweets which have involved more than 3,700 people. The two tag clouds below (one for Twitter and one for other contributions) show a substantial semantic homogeneity.

The tag cloud ‘other contexts‘ highlights:

– the profound meaning of crowdfunding, which can be summed up in the words chosen by a student and aspiring journalist of Brescia: “A virtual quid pro quo” (link).

– gratitude and closeness to the IJF also in the stories of volunteers, maybe the best testimonials of the event:

I joined the crowdfunding for the International Journalism Festival 2014. I think it’s the least I can do for what I received in Perugia in the two previous editions (2009 and 2010): I did not pay anything, neither a subscription nor a fee, and I was able to attend high-level meetings and workshops. The Festival must go on: it is one of the few opportunities in the sector in Italy for training and debate. I think especially for young people, volunteers: we must not take away this opportunity from them (link).

– It is not just an event for professionals, but a great time of civil awareness, creativity and culture which attracts a national and international audience and involves high schools and universities students, politicians and academics (link). In the tag cloud about Twitter conversations the keywords of the IJF support movement, which began immediately after the announcement of the possible closure of the Festival, stand out. The Perugia festival – an unmissable rendezvous for enthusiasts and experts of “giornalismo” and “journalism” – receives numerous expressions of solidarity. The “crowdfunding” path chosen for “saveijf14” arouses significant interest and desire for participation among friends of the festival, expressed with words such as “sfida” (challenge), “donate” and “support“. The words “live“, “incontro” (meeting) and “diretta” (live), referred to the public meeting that took place on 02 November 2013, are emphasized while “grazie” and “thanks” pay tribute to the efforts of the organizers and the many supporters of the International Journalism Festival to keep the show on the road.

To analyze the evolution over time of the conversations on Twitter, we also have made a streamgraph of key terms, The crowdfunding campaign has spread to the major newspapers and online news agencies. Many agreed to call it “the most ambitious project of crowdfunding ever undertaken on a cultural platform in Italy”. Journalists and media professionals have been very active through their blogs and personal Facebook pages, as in the case of Andrea Riscassi (RAI) or Chiara Beretta Mazzotta (Radio 105). The Umbrian textile company Caprai, which is famous throughout Italy for its Cruciani bracelets, has participated involving its 141,000 Facebook fans. The map of connections shows the explosion of a community that has supported the IJF. Here you can download the full-size map. In addition to the journalism festival accounts and  that of Arianna Ciccone (the festival co-founder) we notice Anna Masera, social media editor of the Italian daily La Stampa, and Chiara Spinelli (@chiarapeggy), a real community manager during this crowdfunding. Notable support has also been shown by international journalists such as Steffen Konrath.