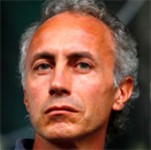 Slurp. Twenty years of unabashed arse-licking that have ruined Italy

by and with Marco Travaglio

In his new theatre show, Marco Travaglio - with the actress Giorgia Salari and under the direction of Valerio Binasco - recounts how journalists, intellectuals and the most servile newspaper columnists in the world have praised and glorified the worst leaders in the world, putting on a pedestal incapable politicians of all hues, voracious managers, failed entrepreneurs. Hagiographies as biographies, Soviet-regime-style news and TV programmes that have chloroformed public opinion in order to bring consensus and votes to a criminal system organized as a caste, one which in another country would have been recognized for what it is and wiped out in a few months, while in Italy it is enjoying the elixir of eternal life. A therapeutic recital as a self-defense weapon, a satirical antidote that helps to heal - by laughing - the virus of conformism, flattery, gullibility, self-destruction and the Stockholm syndrome that always leads Italians to fall in love with the enemy. An enemy who robs and ruins with a smile, while Italians keep their heads well stuck in the sand.