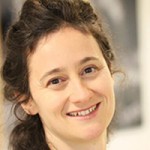 Emily Kasriel leads high-profile projects across the BBC. These projects include Crossing Divides (a pan BBC multi-platform season about bringing people together in a fragmented world across lines of faith, politics, ethnicity and generation) and So I Can Breathe (a BBC News multi-platform season about tackling air pollution). These seasons are part of her work directing the solutions-focused journalism project at the BBC, kick-starting a culture change inside the organisation. This has been achieved via seasons, and delivering workshops from Nairobi to Delhi to Birmingham, toolkits and blogs and speaking at many events and conferences. She also directs the BBC Komla Dumor Award for African Journalists.

She previously served as an award-winning broadcaster and editor at the BBC, reporting and producing for the BBC across 5 continents. Emily has been a Visiting Fellow at Said Business School, University of Oxford, a Senior Advisor to the Skoll Foundation and has written for The Guardian, Telegraph, Independent, Economist and the Financial Times, plus hosts panels globally. Emily is also a BBC Executive Coach, and on the board of The Wingate Foundation.