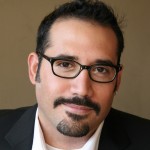 Robert Hernandez, one of the few true veterans of Web journalism, has made a name for himself as a journalist of the Web, not just on the Web. His primary focus is exploring and developing the intersection of technology and journalism – to empower people, inform reporting and storytelling, engage community, improve distribution and, whenever possible, enhance revenue. He describes himself as a mad scientist of journalism.

He believes in “open source,” sharing knowledge and experiences among journalists. To that end, he has taken the leading role in uniting and building a community of digital journalists and technologists, as a national board member of the Online News Association, the leading organization focused on developing digital journalism. He’s also a co-organizer of the Los Angeles chapter of Hacks/Hackers, an international network of journalists and technologists that is rethinking the future of news and information.

Many journalists know him as the co-founder of #wjchat, a weekly forum on Twitter that engages participants from around the world. This virtual gathering is perhaps the best example of his commitment to collaboration and crowdsourcing.

Hernandez also is passionate about diversity in journalism. He is co-chair of programming for the UNITY conference (Las Vegas, August 2012) and is a lifetime member and former board member of the National Association of Hispanic Journalists.

As director of development for The Seattle Times, where he worked from 2002 until 2009, he helped shape and execute the vision for the Web site and company, leading a team of engineers and designers in creating innovative tools and applications for readers as well as staff. He also worked as a Web designer and consultant for El Salvador’s largest daily newspaper site, La Prensa Gráfica, Web producer for The San Francisco Chronicle and online editor of The San Francisco Examiner.

The future of news: experimentation

This year marks the Columbia Journalism Review's 50th anniversary, and in the anniversary issue CJR online editor Justin Peters edited a section that looked ahead to the next fifty years of news. Near...

Mobile for the multimedia journalist

Mobile for the multimedia journalist The power of your mobile phone goes beyond point and click recording. You'll learn how to make your mobile device your number one tool. Organised in associatio...