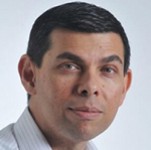 Warren Fernandez is Editor-in-Chief of The Straits Times, Singapore's leading newspaper and website, and Singapore Press Holdings’ English/Malay/Tamil Media Group. He is also President of the World Editors Forum.

Warren joined the The Straits Times in 1990 as a political reporter and rose to become a News Editor. He went on to serve as Foreign Editor and Deputy Editor. Fernandez then joined Royal Dutch Shell in 2008 as a Global Manager for its Future Energy Project, before returning to the paper in February 2012 as its Editor. He assumed the role of Editor-in-Chief of Singapore Press Holdings’ (SPH) English/Malay/Tamil Media group (EMTM) from July 2016.

Warren graduated with First Class Honours from Oxford University, where he read Philosophy, Politics and Economics. He also holds a Master’s in Public Administration from Harvard University's John F. Kennedy School of Government.