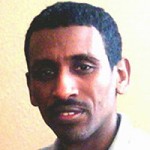 Amanuel Eyasu is the founder and Executive Director of of the popular Eritrean opposition television channel Assenna TV, based in London. He had previously worked as the head of Eritrean News Agency, Asmara and Environs, covering the Eritrean Cabinet's sessions for many years and interviewing senior politicians, including Isaias Afewerki. He later worked for the BBC as s Broadcast Media Coordinator.

Eritrea and Ethiopia: a fragile peace