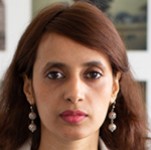 Amira Al-Sharif is an independent Yemeni photographer with over seventeen years of experience documenting the beauty and suffering of her beloved war-torn country, in particular the wisdoms of women young and old. Her work has been published in Yemeni newspapers as well as internationally with National Geographic, the Washington Post, and the Guardian. ARTE recently broadcast a segment on her work in Yemen and life in Paris, and last year’s best-selling anthology Our Women On the Ground: Essays by Arab Women Reporting From the Arab World featured her chapter Yemeni Women with Fighting Spirits. She has also worked on assignments for UNICEF, UNHCR, and Oxfam, and received multiple prizes, fellowships, and nominations, including from the World Press Photo Foundation, Women Photograph, the Prince Claus Fund along with the Arab Fund for Arts and Culture, Samir Kassir Foundation and Free Press Unlimited’s Most Resilient Journalist Award.

In 2010, Al-Sharif studied photojournalism and documentary photography at New York’s International Center of Photography. She later returned to Yemen where she taught visual storytelling to some 300 aspiring photographers for several years. In 2013, she became the recipient of the Safirlab, a programme born in the wake of the Arab spring, designed to help young people proposing socially innovative projects in North Africa and the Middle East.

At present, Al-Sharif is an artist-in-residence at Cité Internationale des Arts, sponsored by the City of Paris and ICORN. She is currently preparing for upcoming festivals, exhibitions, interviews and publications, in addition to finishing her photo-driven nonfiction book His Weapons Are Unwise: The War in Yemen From the Perspective of Yemeni Women (2020/21).

The conflict in Yemen is among the least recounted by the media around the world. The reasons are many, not least the extreme difficulty of access for international reporters and, for locals, the extr...