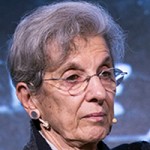 Chiara Saraceno is currently an honorary fellow at the Carlo Alberto College in Turin. Previously she was a research professor at the Wissenschaftszentrum Berlin für Sozialforschung and a professor of family sociology first at the University of Trento and then in Turin. She was part of the Commission for the investigation of poverty and social exclusion in Italy and in 1998-2001 she was its president. He is among the founders of the Alliance for Children. She contributes to the Italian daily la Repubblica. Her research concerns the family, gender and generation relations, social policies and poverty. Her recent books are L’equivoco della famiglia (2017), Mamme e papà. Gli esami non finiscono mai (2016), Il Lavoro non basta. La povertà in Europa negli anni della crisi (2015),  il Welfare (2014) and Coppie e famiglie. Non è questione di natura (2012).

Work, rights, services: for a fairer and more equal society