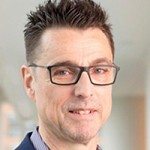 Christopher Turpin is Vice President for Special Projects & Editorial Innovation at NPR. In this role, Turpin is responsible for leveraging the NPR newsroom to tell stories in new, innovative and more impactful ways. He has played a leading role in developing NPR’s podcasting strategy, which has made the organization one of the most successful podcasters in the US. Podcasts Turpin has helped develop and launch include Up First, Embedded and, most recently, White Lies.

Turpin has devoted his entire career to audio journalism and storytelling, as a producer, editor, reporter, program-maker and newsroom leader. Most recently, he was NPR's interim Senior Vice President for News and Editorial Director, overseeing NPR's 500 person newsroom. He has also served as NPR's Vice President of News Programming and Operations, managing the network’s award-winning broadcast news programs, including All Things Considered and Morning Edition.