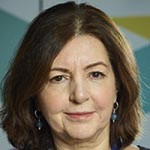 Dorothy Byrne is Head of News & Current Affairs at Channel Four Television. During her tenure, the Channel’s news and current affairs programmes have won numerous BAFTA, RTS, Emmy Awards and others.

Dorothy was made a Fellow of The Royal Television Society for her “outstanding contribution to television.” She has received a Grierson Trustee’s Award for “extraordinary achievements” and in December 2019 at the Women in Film&TV Awards The Argonon Contribution to the Medium Award. Also in 2019, she delivered the annual MacTaggart Lecture at the Edinburgh Television Festival and the Manchester University Cockford Rutherford lecture, which is given annually by a distinguished alumna of the university. In the same year she published her first book, Trust Me I’m Not a Politician, and has also contributed to various books on media ethics and regulation. At the RTS Journalism Awards in 2018 she was honoured with an Outstanding Contribution Award. She has received a BAFTA Scotland award for her services to television and has also previously won the Factual Award given by Women in Film and Television.

She is a trustee of the Ethical Journalism Network which supports the development of ethical codes in journalistic organisations across the globe She is a former World In Action producer and editor of ITV's The Big Story. Before joining Channel 4 she also produced arts programmes and executive produced history series for the channel. She is a Visiting Professor at De Montfort University where Channel Four supports an MA in Investigative Journalism.