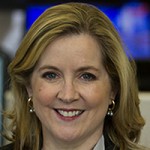 As the founder and CEO of O’ Media Strategies, Kate O’Brian focuses on advising media companies on high-level strategy, executive leadership, and content development. The O’MS client roster includes the Washington Post, Voice of America, The United Nations, and the Corporation for Public Broadcast, among others. Kate’s extensive media career includes serving as president of Al Jazeera America, the award-winning US-based cable news and digital organization, and as ABC News’ senior vice president for global news coverage, editorial units, and operations. Throughout Kate’s career she has traveled widely and lived all over the world, including stints in Rome, Washington DC, London, Atlanta, and Nairobi, and New York.

Kate is the recipient of numerous personal and team awards including a Peabody Award, an Emmy, two Alfred I. duPont Awards, and the 2015 Robert G. McGruder Award for commitment to gender and ethnic diversity. She serves on boards of Press Forward, an initiative changing cultures in newsrooms; the Aspen Institute’s Artisan Alliance, supporting sustainable growth in global artisan businesses; the Turkey Land Cove Foundation, which provides working residencies for women; and the Partnership for After School Education, a child-focused organization in New York City.

Ageism in the newsroom: when are you too old to make the headlines?

How often have we heard that journalism is a young person's game? Why does our industry frequently make it clear it doesn't welcome older employees? For a newsroom to be truly representative of societ...