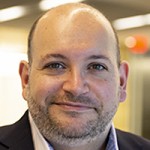 Jason Rezaian writes for The Washington Post’s Global Opinions section. He served as Tehran bureau chief for the Post from 2012 to 2016.

In July 2014, he was arrested by Iranian authorities and imprisoned for 544 days until his release in January 2016. Rezaian’s memoir, Prisoner: My 544 Days in an Iranian Prison, was published in January 2019. In addition Rezaian is a CNN contributor. He was a Nieman Fellow at Harvard University, Class of 2017, and a Terker Distinguished Fellow at George Washington University, 2016-2018.