Dart Centre for Journalism and Trauma 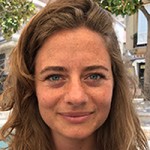 Jeanny Gering is a freelance journalist based in Berlin. She mainly works as a TV news and documentary film producer for international broadcasters like the BBC, CBS and Arte. In the past two  years she has predominantly worked on news pieces and documentaries on the refugee crisis. Her most recent documentary Germany’s New Nazis for BBC One Panorama looked at the rise of the far right in Germany. Jeanny has also produced and shot two independent, award winning short documentaries Power and Odyssee.

As the Germany country contact and Program Coordinator for the Dart Centre for Journalism and Trauma Europe, she supports the centre’s work across Europe by organising journalist retreats, producing resources and facilitating the Dart network.