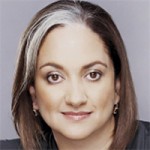 Ferial Haffajee is Associate Editor of the Daily Maverick. Previously, she was editor-at-large at HuffPost South Africa and editor-in-chief of both City Press and Mail & Guardian (2004 to 2009). She was awarded the 2014 International Press Freedom Award by the Committee to Protect Journalists and was appointed to the board of the International Press Institute in 2011.