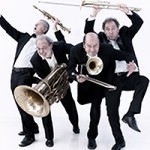 Banda Osiris was formed in Vercelli in 1980. They have produced many theatrical productions directed by Gabriele Salvatores, Maurizio Nichetti, and Giorgio Gallone. The band has published the books T’amo pi oboe and L’opera da tre sol for the publisher Bompiani, and more recently Le dolenti note for Ponte delle Grazie, ed. Salani. They have composed the music for the films directed by Silvio Sodini, Kimi Rossi Stuart and Cristina Comencini. The soundtrack for the movie L’imbalsamatore has won the Flaviano Prize, and the soundtrack for Primo Amore has been awarded the Silver Bear at the Berlin Film Festival and the David Donatello. Both movies were directed by Matteo Garrone.

For five years, they have performed (live) on the television show Parla con me presented by Serena Dandini and Dario Vergassola on RAI 3.

In 2014 they toured the show Beatles submarine, a production on The Beatles directed by Giorgio Gallione with the participation of Neri Marcorè. More than one hundred performances were played in this tour.

In the summer 2014 they were entrusted by the Istituto del Dramma Antico with the composition of the soundtrack for the theatrical play Le vespe by Aristofane. They performed it live at the Greek theatre in Siracusa for two months.

In 2015 they toured Il Maschio inutile with Telmo Pievani and Federico Taddia; and the theatrical adaptation of the book Le Dolenti note.

They are the authors of the soundtracks of the radio programs Caterpillar and Un giorno da pecora. They are the artistic directors of PianoForte sostenibile and La festa della musica in Portogruaro.

#EuFactor: face to face with science!

Creativity, passion... and talent. Scientific dissemination and the world of innovation transformed into a show: the "EuFactor" project is presented with rigour and irony, thanks to the storytelling...