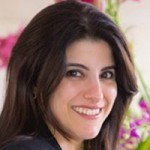 Lara Ayoub is the Digital Director of Al Mamlaka TV, Jordan’s first public service news station and also the co- founder of SADAQA, a not-for-profit organization working to create a family-friendly work environment by advocating for the implementation of Article 72 of the Jordanian labor law which calls for the provision of workplace daycares. She sits on the board of Save the Children, World Association of Newspapers (WAN-IFRA) Middle East, and Leading Change Network.

To date, Ayoub has established and operated the digital newsrooms of three TV stations and two print publications including Ro’ya TV and Alghad daily newspaper. Ayoub is committed to offering fact-based professional news content to ensure quality reach and meaningful audience engagement across digital platforms. In 2013 she completed the Harvard Executive Leadership program, later becoming a Harvard Teaching Fellow in 2015. Ayoub is a 2017 Eisenhower Fellow where she completed an intensive US-based program which included meeting executive leaders in the media industry where she explored best practices in digital journalism and social media. In 2010, she was selected to participate in the Fortune/U.S State Department Global Women Leaders Mentoring Partnership where she was mentored by the Yahoo! CEO, UCLA's first female Dean and other prominent leaders. For three consecutive years she has been a Juror for the WAN-IFRA Global & Middle East Digital Media Awards as well as the Flag Bearer of the annual Global Mentoring walk which takes place in over 60 countries including Jordan. Ayoub has over 13 years’ experience in digital and social media working as a consultant/trainer with a range of clients. She is a certified video producer from the London School of Media, Film and TV. Her most recent consultancy projects include the International Centre for Migration Policy Development, the International Labor Organization, the American and Australian Embassies in Jordan, GIZ , Dar Al Omran, MAS holding, Jerash Garments, Deutsche Welle TV, and Image Nation. She is the winner of the 2019 Goldman Sachs-Fortune Women Leaders Award and a member of the Young Entrepreneur Association, Vital Voices, Eisenhower Fellowships and Business Professional Women Association. Today she continues to serve as a mentor and coach for young emerging leaders.