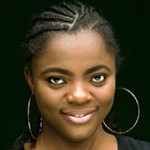 Mercy Abang is a Nigerian journalist whose reporting focuses on under-or-never-reported stories  ignored by mainstream media. Her stories have been published by Aljazeera and she has been a stringer for the Associated Press and a fixer for the Sunday Times of London and the BBC World Service Trust, amongst others. Mercy was a 2017 United Nations (Dag Hammarksjold) Journalism Fellow. She has gone on several election observation missions on the West African sub-continent. Mercy played an important role in reporting the Ghanaian elections, covering various polling stations all over the country and reporting about the role of Ghanaian bloggers during the recently concluded elections. She has a degree in journalism, and studied digital storytelling, advertising and public relations. She is a member of the Hostwriter network of journalists.