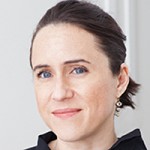 Heather Chaplin is the founding director of Journalism + Design at The New School, co-host of the podcast Tricky, a columnist at Columbia Journalism Review and a former fellow at The Tow Center for Digital Journalism. Chaplin started her career at Salon where she wrote The Reluctant Capitalist column. Over the years, she’s worked for many publications, such as The New York Times and All Things Considered. She is the co-author of Smartbomb: The Quest for Art, Entertainment and Big Bucks in the Videogame Revolution, a New York Times Notable Book of 2006. Chaplin has been recognized for her work on digital culture and the future of journalism in places including The New York Times Magazine, The New Yorker, The Believer, CBS Sunday Morning, Talk of the Nation and The Nieman Report, among other places. Chaplin is also a frequent speaker on these topics. Her most recent book is her first foray into memoir: Reckless Years: A Diary of Love and Madness was published by Simon & Schuster in 2017.