Eyebeam Center for the Future of Journalism 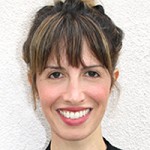 Marisa Mazria Katz is a New York–based journalist/editor who has contributed to numerous publications and television channels on culture, politics and design, including The New York Times, Time, Financial Times, Foreign Policy, The Economist, The New Republic, The Washington Post, The Wall Street Journal, Vogue, and Metropolis Magazine. She is the editorial director for Eyebeam, where she oversees the newly launched Eyebeam Center for the Future of Journalism. From 2011-2017 Marisa was the Editor-in-Chief of Creative Time Reports, an online platform featuring artists as correspondents on the news, bringing their own unique spin to current events. Under Marisa’s tenure, the website co-published articles with The Guardian, Al Jazeera America, Foreign Policy, The New Yorker, Slate, The Intercept, and many more. She was a Kickstarter fellow in 2018, and her most recent book, entitled Artists on the News, was published by Paper Chase Press in 2019.