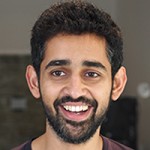 Surya Mattu is a Brooklyn-based investigative journalist, artist and engineer and who looks at the ways in which algorithmic systems perpetuate systemic biases and inequalities in society. Currently he works as an investigative data journalist at The Markup. Previously, he was a contributing researcher at ProPublica, where he worked on Machine Bias, a series that aims to highlight how algorithmic systems can be biased and discriminate against people. Machine Bias was a Pulitzer Prize finalist for Explanatory Journalism. He has also worked at the Special Projects Desk of Gizmodo and been a visiting scholar at the MIT Media Lab. He has shown work at The Haus der Kulturen der Welt, Museum of Art & Design, The Whitney Museum, V&A Museum and Bitforms Gallery.