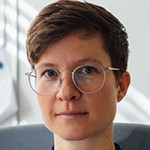 Uli Köppen, a 2019 Nieman Fellow, is head of data journalism at the German public broadcaster Bayerischer Rundfunk (ARD) and an affiliate to the Berkman Klein Center for Internet and Society at Harvard. She oversees a team of journalists, coders, and designers specializing in investigative data stories, interactive storytelling, and experimentation with new research methods such as bots and machine learning. She is a founding member of butterland, a group dedicated to slow journalism whose projects include reporting done with victims of Turkey’s clampdown on press freedom. Together with her colleagues, she has won several awards including two CIVIS Media Prizes and a Philip Meyer Award as part of the first non-American team.