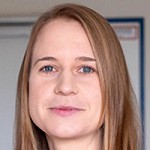 Maren Urner is a German neuroscientist, co-founder of Perspective Daily, professor in Media Psychology and best-selling author. She studied Cognitive Science and Neuroscience in Germany, Canada and the Netherlands and holds a PhD from the University College London. In 2016 she co-founded Perspective Daily, Germany’s first advertisement-free online magazine for Constructive Journalism. Until March 2019 she led the editorial office as its editor-in-chief and was managing director of the company. In April 2019 she started as a lecturer in Media Psychology at the University of Applied Sciences for Media, Communication and Management in Cologne and was appointed as professor in October. In June 2019 she published her first book (German only) which entered the SPIEGEL bestseller list only a couple of weeks later.