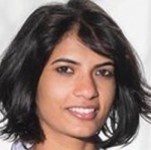 She was previously awarded fellowships from the International Women’s Media Foundation and the International Reporting Project to cover underreported stories from Africa and Latin America. Prior to that, she was a reporter in the United States and in India, where she covered politics and general news for Thomson Reuters and The New York Times. She holds a Master’s from Columbia University’s Graduate School of Journalism.