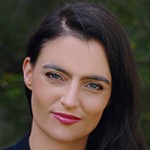 Elodie Vialle is a journalist and a Knight-Wallace Fellow at the University of Michigan, working on countering online harassment against journalists. She provides advises on the set up of internal protocols within newsrooms to mitigate those attacks. Prior to that, Elodie was the head of the technology desk at Reporters without Borders, where she monitored emerging threats undermining journalism. Her work focused on areas such as online censorship, surveillance, disinformation, the impact of artificial intelligence on press freedom and internet governance.

Elodie often speaks as a guest lecturer at universities, engaging with public, tech companies and authorities on challenges faced by the media outlets. Previously, she was an international media consultant, supporting the improvement of news coverage through the use of new technologies. She was Editor-in-chief of an online media dedicated to social innovation, hosted a program on change-making initiatives at the national French radio France Inter and began her career as a TV journalist. Elodie is a graduate of Ecole supérieure de journalisme de Lille.