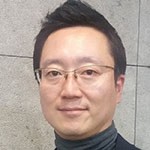 Jae Young Kim has been a journalist for over 15 years. He was a reporter in Dong-a Ilbo, one of the top three national newspapers in Korea, and now works as an editor/producer of The Anchor’s Eye, a 6-minute independent section of prime time news at Munhwa Broadcasting Corporation, a nationwide public broadcasting company in Korea.

Kim previously worked as a journalist and producer of sports program covering events including the EUFA Cup, Dakar Rally and golf tournaments. Kim has expertise in researching and investigating social irregularities. His work includes a series of reports uncovering suspicious trial distributions 2009 and an award-winning piece of work, Chairman's violent revenge (2007), which attracted significant attention and earned a number of awards from major media associations.

After working as a daily news reporter for many years, Kim is now longing for to refresh his education. He recently published a master’s degree thesis, researching communication problems between the government, public and the media which won Dean‘s Award 2016, at the Graduate School of MCPR, Konkuk Univ - despite Kim suffering from MERS (Middle East Respiratory Syndrome) after the disease broke out in Korea.

He is currently on a 2016-17 Fellowship at the Reuters Institute for the Study of Journalism, University of Oxford, where his field of research is How to Improve Communication between the Government, Media and Population when Reporting Disease-Related Disasters.